Electronics manufacturing uses a LOT of resources – on average, 1.5 tons of water, 539 pounds of fossil fuels, and 48 pounds of chemicals are needed to make one computer and one monitor (Wang, 2017). With more than 500 million computers, monitors and tablets sold to consumers last year, those resources add up.

They also add up financially. For example, the semiconductor manufacturing industry uses (UPW) in its fabrication process:

For every dollar a fabricator spends on utility-supplied water, $20 is spent treating it to an ultrapure quality, and another $10 is spent to [treat the discharge to acceptable levels] (Infohouse, 2000).

The same report estimates that a large facility could use up to 3 million gallons of UPW per day, and at least 30 percent of the water used at a large manufacturing facility is specifically for etching and solvent processes.

Sound like a cost-saving opportunity in resource efficiency? It is. That’s where AR/VR manufacturers may be able to take advantage of today’s evolving additive manufacturing technology.

The root of the resource demands can be traced to the most common method of manufacturing today, called subtractive manufacturing. This occurs when a product is produced by removing or “subtracting” from a larger piece of material; for example, think of when kids cut out smaller squares of Play-Doh from a larger, rolled out sheet. There’s always a lot of scrap, and it’s a pain to pick up the little pieces. 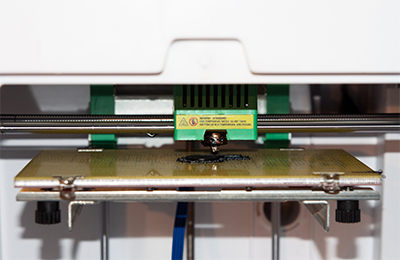 There are several subtractive manufacturing methods available today. One of the most common is chemical etching, which involves using chemicals to etch a final product out of a larger piece of material.

Additive manufacturing, an emerging technology, is a solution to the waste produced by traditional subtractive methods. Go back to the Play-Doh analogy; instead of cutting a square from the larger chunk of material, imagine you could pick the exact amount of material you need from the container.

With additive manufacturing technology like 3D printing, this concept is becoming a reality. Almost the same way your inkjet printer at home prints photos of your kids, metals like silver and copper are printed or sprayed onto a substrate at a nanoparticle level.

“By using additive methods as opposed to subtractive methods, we are able to develop products that were once not possible. Now we are able to do it with fewer resources than we originally thought” said Vic Zaderej, Advanced Development Manager at Molex.

In addition to water, subtractive manufacturing uses some seriously unforgiving chemicals. Baths of chemicals like hydrochloric acid and ammonia are used during the etching process, which are later removed with a water wash that typically must be treated after use to meet legal concentration levels before it can be disposed of into the sewer system.

Composition of these chemicals is also experiencing increased scrutiny in the industry. Since the RoHS standard was initiated in 2003, limiting the number of different substances in consumer products (most notably lead, mercury and cadmium), several other compliance standards have been set. Many major manufacturers have developed their own standards that even go beyond standards like RoHS and REACH, which presently limit 180 different substances combined. These increased restrictions are driving prices of these manufacturing chemicals upwards, thus affecting the cost of some subtractive manufacturing operations.

Vic and his team are working on one such additive manufacturing technology that shows a lot of promise called ASEP (Application Specific Electronics Packaging). ASEP uses nanoparticles and spray-on technology that enables engineers to design smaller, lighter, higher-performing products than are on the market today. “ASEP is also more resourceful, using about 90% less water than typical subtractive manufacturing,” Vic continued. “The materials we use are RoHS and REACH compliant and entirely recyclable metals and thermoplastics.”

The emerging AR/VR market is a prime target for additive manufacturing technologies like ASEP. With their high-demand operations and miniscule electronic real estate, AR/VR applications demand their manufacturers to apply electronics and/or circuit patterns onto components in ways that have never been done before. ASEP technology provides a foundation to do this while also reducing labor time, chemicals and water and decreasing the number of manufacturing steps by as much as 40 percent.

You will hear a lot more about ASEP technologies in the AR/VR industry and many other areas of micro-sized and precision electronics. Discover more about Molex connectivity options by requesting your free AR/VR sample kit today and stay tuned for the 4th and final article about the challenges faced within the AR/VR market.

For more information on ASEP and its capacity within the AR/VR world, check out the challenges faced within the industry and how ASEP can solve space constraints in AR/VR applications.