Augmented Reality/Virtual Reality (AR/VR) hold great promise in a wide range of industries: gaming/entertainment, logistics, medicine and more. In fact, according to an Aug. 9, 2017, Business Insider article, total global spending on AR/VR is expected to grow 113 percent a year on average, reaching $215 billion in 2020. In comparison, global sales in 2017 are expected to reach $11 billion.

But first AR/VR needs to overcome a few technological limitations, including headsets’ limited field of view, their need to be tethered to computers and difficulties in tracking the real world. Limitations involving electronic subassemblies also exist, such as space and weight constraints to keep headsets and smart glasses from being cumbersome. 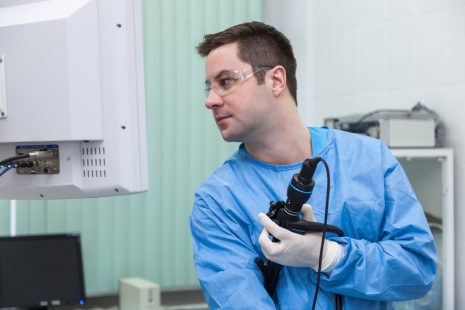 Heads up method in surgery

According to an article published by Annals of Translational Medicine, AR/VR is poised to revolutionize the operating room. Surgeons already use AR, especially in neurosurgery, but the “heads-up” method, in which they refer to a separate screen as they operate, is often cumbersome in a field where intense focus is literally a life-or-death necessity. As a result, AR headsets or smart glasses that enable information to be superimposed on lenses promise to be the next-wave technology for surgery.

As stated in the same article, AR headsets also need to become more portable and lightweight: “For the device to be a natural extension of the surgeon’s senses, it has to be light, mobile, comfortable and functional for potentially long periods of time.”

AR Efficiencies in Warehousing and Logistics

After a series of global AR pilot programs, DHL Supply Chain announced in August 2017 that it plans to implement AR smart glasses as a standard for order picking at DHL Supply Chain warehouses around the world. Because data is delivered from the company’s network to the smart glasses, workers have the information they need in a hands-free method, eliminating the use of hand-held scanners and paperwork. The trials resulted in a 15 percent increase in productivity and improved accuracy rates. The company is now researching other applications for AR/VR in training, maintenance and more.

According to a BrainXChange article, Why the Logistics Industry Is Going Hands-Free, UPS has also tested AR smart glass technology to simplify workers’ tasks, and it is reportedly implementing a driver training VR program, using headsets, at nine of its training locations. Furthermore, FedEx pilots already use heads-up displays (HUDs) to aid navigation during night flights and bad weather.

As a result of the experiences of these and other logistics companies, industry analysts are optimistic the use of AR smart glasses will continue to increase over the next few years, boosting the AR/VR market. Developments in technology will fuel this growth, and the size of the devices is one aspect that calls for improvement. For example, before AR/VR technology can be implemented in new applications, developments  in “the size and style of smart glasses to make them more appealing to users” are necessary to overcome workers’ lingering reluctance to adopt this new tool, according to Smart glasses get a second look from warehouses, an article in DC Velocity, a logistics and supply chain trade publication.

Molex is breaking through some of the barriers in AR/VR technology with space-saving products and capabilities. For example, the Application Specific Electronics Package (ASEP) solution is a Molex innovation that transforms the manufacturing process of electronic functions, enabling engineers to develop AR/VR designs that are smaller and weigh less while delivering high performance and cost-effectiveness. “ASEP integrates electronic functions into a single device that becomes the backbone of an electronics system,” explained Victor Zaderej, Molex Advanced Engineering Development Manager. “It can help bring AR/VR to the next technological level by offering creative packaging designs that solve size and weight challenges.”

Molex is also developing another revolutionary technology, Miniature Hinge Connectors. This innovative component could have an impact on applications like AR smart glasses by transmitting power and data from an electronic subassembly in the arm of the glasses to the lenses.

Additionally, to meet the size and portability requirements of any AR/VR application, Molex offers custom antennas, MID/LDS capabilities, flexible circuits and a wide range of microminiature connectors to overcome any size or weight limitation.

AR/VR technology is creating nothing short of a paradigm shift in a range of industries, and innovations in electrical circuity are paramount to AR/VR’s continued trajectory. Look for coming articles in Molex’s AR/VR/MR series to learn about new developments in this exciting technology and the electrical solutions that will help drive its success.

By James Blankley
Next: GFCIs an Integrated Approach to Electrical Safety →