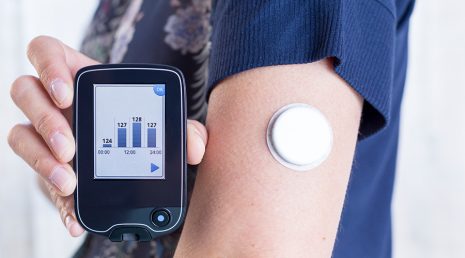 Noninvasive biomarker sensors in medical wearable devices promise profound improvements in healthcare outcomes. However, the capability to measure biomarkers in sweat and other bodily fluids is far more nuanced than that of sensors currently used in wearables that count steps or monitor temperatures.

Physicians analyze biomarkers, which are specific physiological indicators, to diagnose and monitor patients who may have conditions such as cancer, heart disease or previously undetectable signs of diabetes. In keeping with the trend of patient-centered medicine, medtech developers are using biomarker sensing to design solutions for increasingly individualized monitoring.

For example, today there’s growing interest in wearable devices that measure biomarkers in bodily fluids, such as blood, sweat and saliva. Monitoring biomarkers via bodily fluids is painless and often noninvasive, and it can help with ensuring patient compliance. In addition to profoundly improving healthcare, accurate and noninvasive monitoring of biomarkers would also create market opportunities for sensor device developers. But first, developers must overcome a number of technological and design challenges.

Researchers, startups and industry leaders are actively working on projects to create sensors capable of measuring biomarkers in human sweat. Lactate, for example, can indicate the onset of fatigue and serve as a marker for all-cause mortality in hospital patients. Additionally, progress has been made toward developing sweat-based glucose monitoring. Biomedical engineers and material scientists have collaborated to develop small, wearable flexible sensors that read multiple biomarkers in sweat and transmit that data to smartphones for real-time tracking and analysis.

However, biomarkers exist in smaller concentrations in sweat and saliva than in blood samples, and detecting these lower concentrations is challenging. A number of intriguing biomarker sensor technologies have been demonstrated successfully in labs. For example, chemical compounds in disposable sensors act as receptors for specific biomarkers, and then the chemical reception becomes a variable resistive load on the sensor. But new technologies such as this will require further development to achieve the desired performance levels for use in wearable products.

In the meantime, Molex has developed various thin and flexible platforms that can interface with a variety of disposable sensors. Our sensor platforms are custom configured to make a signal interpretable within the given sensor responsiveness and application requirements. Reception of the biomarker compound effectively turns into identifiable load on the sensor, which is then amplified, digitized and transmitted to a processor to perform logic computations and ultimately communicate to the user via an indicator display or other human-machine interface, such as a mobile device.

The commercial success of a device depends on sensor system form factor and performance, in addition to manufacturability and, ultimately, cost. A range of sensor platforms can be used for biomarker sensing prototypes and for conducting subsystem functional testing. A typical biomarker sensor platform would include a microprocessor, an operational amplifier and an analog-to-digital converter, indicator LEDs or a display, an antenna, possibly additional memory, and coin cell or thin-film batteries.

To be unintrusive to the user, wearable biomarker form factors need to be thinner than most current integrated sensor designs, which are typically 2.00 to 5.00mm thick. A thinner silicon die will allow for a thinner and more flexible substrate. High-speed sheet-to-sheet and roll-to-roll printing and assembly technologies can allow high-volume handling of much thinner substrates (1.00 to 2.00mm thick).

The Future of Patient-Centric Healthcare

Important progress has been made to improve consistency in thin flexible sensors to detect a range of biomarkers in human biofluids. Pioneering developers are now working on wearable biomarker sensor solutions that are reliable, accurate, disposable and economical.

By Molex
Next: Harnessing the Third Wave of Artificial Intelligence →