Ricky Alvarez had always been an avid soccer player, and although running was part of the game, he had never considered participating in any races. That all changed October 8, 2017, as he cheered on his Team Molex colleagues at the Bank of America Chicago Marathon. As the energy of the event pulsed through him and he watched countless runners dash by, he decided there were no excuses—he would run the 2018 Bank of America Chicago Marathon.

Despite the grueling training schedule, he pushed through with a single goal in mind—to finish. Once he achieved that goal, he thought he would hang up his marathoning shoes for good. But as he crossed the finish line at 4:30:07, he felt a tremendous sense of accomplishment, fueled by the hours of arduous training, motivated by each of the 26.2 miles under his feet and captivated by the race environment—the determination of his fellow runners and the enthusiasm of endless cheering spectators and volunteers. He was hooked. Ricky spent the winter mentally preparing to train for and participate in the 2019 event when adversity struck. 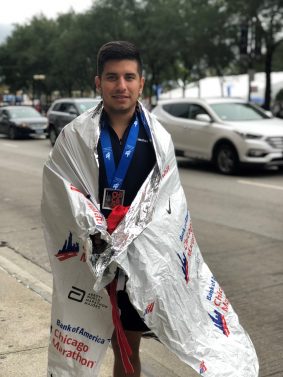 On a snowboarding trip in early 2019, Ricky broke his ankle. With a long road to recovery ahead, doctors warned him that a return to normalcy was uncertain. This made Ricky more determined than ever to finish another marathon. Three months into recovery, Ricky regained his ability to walk, and within a few months, he was back to running short distances. Unable to run the 2019 Chicago Marathon, he joined Team Molex as a volunteer at the mile 9 water station—an experience he says was as rewarding as crossing the finish line the previous year.

Adamant to make a full recovery and not allow his injury to prevent him from living his life, Ricky persevered and, within one year, was back to snowboarding. Additionally, he readily signed up for the 2020 Bank of America Chicago Marathon and trained with extreme discipline. When the event was canceled and transitioned to a virtual experience, Ricky eased up on his training and will instead complete the half marathon distance along Lake Shore Drive in Chicago.

Despite a tumultuous year, Ricky remained determined to push through. The main lessons he learned were that some things in life will be out of his control and that adversity is inevitable. However, he recognized that the choice was his—either dwell on the injury or persevere to overcome it and achieve his goals.

Ricky plans to continue marathoning and has made a commitment to himself to finish the 2021 Bank of America Chicago Marathon. He also aspires to take his journey internationally, with a goal to someday finish the BMW Berlin Marathon.

Ricky’s determination and ability to overcome adversity is an inspiration. We wish the best of luck to Ricky and look forward to seeing all that he accomplishes!