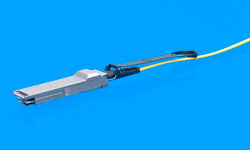 It is difficult to overestimate the impact of the emergence of the Cloud on everything from equipment design to network construction, but one physical impact is that data centers are becoming larger and more distributed.  One increasingly common challenge is that in many cases physical constraints make it impossible to keep expanded data center capacity in the same building or floor.  So, in many cases as Cloud Services Providers expand, they find the need to increase capacity in adjacent buildings or different floors.

All of this leads to a new technical challenge:  the need for longer links to economically interconnect larger data centers, and data centers that may be constructed as pods or clusters distributed across a campus.  Molex singlemode silicon photonics is uniquely suited to address this challenge: it has reach of up to 4KM at the same level of power consumption and cost as distance constrained VCSEL based optics.

First, a quick synopsis of the current options available to data center designers.  Currently data center designers essentially have two optical interconnect options:  short reach (SR) and long reach (LR).  The problem is that SR optics (or traditional VCSEL based optics) are limited in the distance they can transmit.  That limit is generally accepted at 300 meters, and many product offerings can only go 100 meters and in some cases even down to 50.  They offer a significant advantage over copper interconnects, but are now suffering the same problems copper interconnect had:  as data transmission speeds increase, the distances that can be run are getting shorter and shorter.  Yes, some of that impact can be mitigated by installing (yet another) fiber upgrade to OM4.  However, network designers are getting weary of very expensive and difficult to implement structured cabling upgrades as speeds continue to increase.  In short, SR optics have increasing limitations as distances and speeds increase.

The other option to fill the distance gap has been long reach (LR) optics.  They function very well, but because they are designed for very long distances (100KM and higher) they are both very costly and use lots of power.  Cost and power consumption are the serious issues in data center design, so that solution is not really viable.

The market has been seeking a third option, and Molex single mode silicon photonics base active optics are uniquely positioned to satisfy this growing market requirement.

As someone who spent the 90’s working with high speed copper interconnects, I remember all of the technical challenges (ongoing today) of finding new and exotic ways to increase the distances and speeds copper interconnects could handle.  At the time, fiber optics were viewed as the option for handling higher speeds and longer distance requirements.  Few predicted that traditional VCSEL based optics would begin to experience some of the same challenges as copper interconnects did over a decade ago, and yet, that time is here.

Singlemode silicon photonics bridges the gaps caused by the dual requirements of being able to handle longer distances and accommodate higher data transmission speeds.  For many customers this technology provides lower cost, lower power option for what can be referred to as medium reach (MR) distances, and provides a solution that is future proof for next generations of data transmission speeds.  And at Molex, that technology is available today.