Software-Defined Vehicles: The Path to Innovation and Differentiation

The automotive sector is well on the road to embracing software-defined vehicles. In fact, an ever-increasing reliance on digital smarts, in addition to mechanical parts, will advance driving experiences in leaps and bounds.

From seamless driver-assistance to infotainment and advanced connectivity, software is the critical enabler for the car of the future. Due to the growing reliance on software and electronics, it’s not uncommon for today’s cars to contain some 100 million lines of software code. That’s 10 times the typical amount in 2010.

Not surprisingly, 60% of automotive decision makers say that software-defined vehicles will be a top initiative for building the car of 2030, according to Molex’s recent “The Future of Automotive” survey. Other findings: by 2030, nearly all cars will include some form of autonomous driving, with car-to-mobile device integration and car-to-car connectivity standing out on a list of the top 10 most likely standard features.

When we launched Molex’s Connectivity Mobility Solutions business unit in 2016, the vision was to solve vehicle connectivity challenges by leveraging our extensive expertise in wired and wireless communication technologies to deliver a seamless user connectivity experience. We remain dedicated to fulfilling this vision.

One of the early indicators of software’s prominence in advancing the auto industry is evident in growing adoption of over-the-air (OTA) updates. Tesla made automotive history by making OTA software patches standard on its Model S cars in 2012. Since then, OTAs not only have proven to enhance the functionality, security and safety of cars, they help ensure longer-term car value.

Today, even used Teslas command premium prices, in large part because of this feature. Cars are less likely to lose their value as soon as they drive off a car lot when their value no longer depends on current functionality. Instead, OTAs let owners future-proof their investments with the latest enhancements and upgrades. Potential fixes also can be enabled over the air–even years after the original purchase. 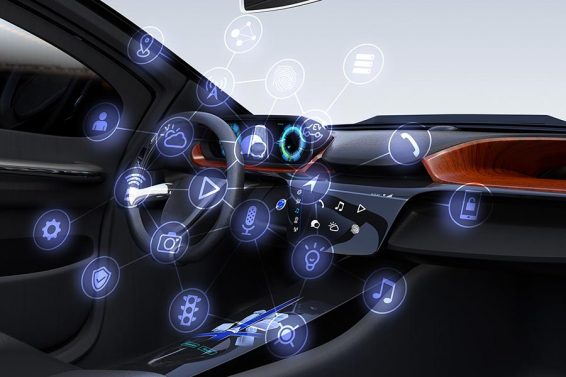 With software firmly in the driver’s seat, car makers can redefine service, reliability and even how they scale features. We’re already seeing this with autonomous cars under development, with transformations evident in vehicle features and appearance. One example is the Audi e-tron. Instead of rearview mirrors, the all-electric luxury crossover uses cameras to relay a driver’s rear view on cockpit screens. Other auto innovators are following Audi’s example.

At Molex, we believe software will drive everything from safety features to better reliability and a vastly improved driver experience. Software will enable all the applications, set functional priorities and timing, monitor performance and deliver necessary updates that cause the vehicle to react. In the future, when people choose a vehicle, the decision won’t just be economic–it will be based on features and connectivity.

Yet no matter how advanced automotive software becomes by 2030, it still must work with hardware. Software puts new demands on hardware—semiconductors, interconnect devices, antennas, Lidar, cameras and myriad sensors—that must be connected seamlessly and integrate flawlessly.

We’re committed to working closely with our partners and customers to ensure that all of the technologies coming into connected cars can interoperate seamlessly. It’s not that everything is software driven, but how you integrate software is key to enabling this advanced functionality. Increased software simulations are the best way to prove how well everything works together while validating car designs to ensure interoperability while meeting demands for accelerated development cycles.

Given software’s role in the car of 2030, it’s not surprising that traditional automotive OEMs are facing competition from, and are collaborating with, tech goliaths like Microsoft, Amazon, Google, IBM and Dell. Molex knows this ecosystem well from our long track record of success supporting the high-speed connectivity requirements of the enterprise networking, telecommunications and data center markets.

Collaborating with technology stalwarts and leading automotive silicon suppliers is critical. So is being an active participant in key industry standards developments. This commitment has enabled Molex to play a growing role in optimizing chip performance. In fact, many reference chip designs we developed now are being modified for auto-grade uses, putting Molex in a strong position to help the technology sector better define future requirements of automotive chips.

Software has emerged as the game changer in the car of 2030, but software alone isn’t enough. It will take software engineers who can design with vehicle hardware in mind. It also will require connectivity infrastructure that can deliver reliable, high-speed connections.

Molex can serve as that partner on all fronts, with our automotive and connectivity expertise and experience that include significant investments in high-bandwidth cabling, seamless connectivity of our wired and wireless consumer devices, and technology leading mobile antenna technology. After all, we will only realize the software-defined car of the future if we can support full-throttle connectivity on the move.

By Bill Fitzer
Vice President, General Manager Connected Mobility Solutions Business Unit
Next: Why China Will Produce the Car of the Future, First →