The Industrial Internet of Things: The Opportunities Connected Components Can Create

The Internet of Things (IoT) has taken the consumer world by storm over the past few years, filling households, vehicles, and office and retail spaces with Internet-connected smart devices that interact with people and environments alike. The tech trend has been adopted—and expanded on—by industrial organizations large and small, combining sensors, networks and analytics to facilitate smarter, safer and more efficient operations. Known as the Industrial Internet of Things (IIoT), this segment of IoT is expected to bring about a new era of automated factories with unprecedented supply chain management capabilities, asset tracking and self-healing equipment.

Industrial markets, including automotive, food and beverage, shipbuilding, material handling, and semiconductor segments, are uniquely situated to take advantage of connected capabilities, according to John Harrison, Molex’s director of industrial sales in the Americas.

“It’s not that suddenly new devices have come out to support this,” Harrison said. “We’ve had sensors on machines for years, and we’ve been recording data from machines since automation first came about in the industrial revolution. The key difference now is that you have all of these sensors and data and communications, and people are starting to pull that together and use that data to make decisions. In the past, we’d have this data that we recorded and filed away, but now data can be used in real time to make decisions.”

Predictive maintenance is a prime example of how sensors, automated data collection and cutting-edge analytics can work together to make manufacturing operations more efficient, Harrison explained. This has been especially useful in the petrochemical environment due to the potential for catastrophic failure. In oil refineries, where corroded valves often cause leaks, sensors are placed around valves to alert when they reach a dangerous level of corrosion. By using an IIoT approach, though, corrosion can be addressed before it turns catastrophic.

“Say we have those sensors on fifty thousand valves around refineries,” Harrison said. “We can start to predict how those valves act within certain environments. If you’re by the coast and it’s a heavy salt environment, the corrosion is going to be more aggressive than in the middle of the country. You can then start to make better decisions on how to improve that valve rather than waiting on it to fail or replacing it unnecessarily. It’s not just a blanket replacement of everything—you can be much more precise.”

The IIoT approach is also changing how manufacturing sites operate, with a focus on keeping employees out of harm’s way while streamlining operations. With more sensors that both read and communicate critical information, fewer people will have to be in potentially hazardous situations—Harrison said he envisions fewer engineers using handheld detectors to identify gas leaks or manually checking potentially problematic equipment. 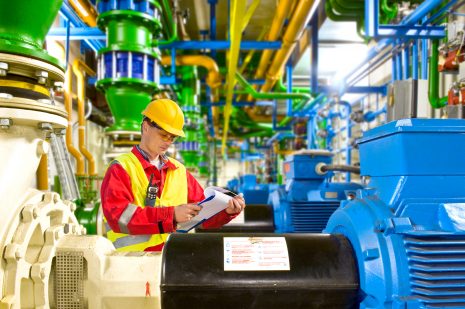 “The fewer people you have in a refinery, the less risk there is,” Harrison said.

And because this critical data is being collected and sent to the cloud, it can be accessed and acted on from anywhere—so plants and facilities can be run remotely.

“One example is in the paper industry; there are a lot of plants in very rural Georgia, and not many skilled engineers want to live and work in those areas,” Harrison said. “But with an IIoT setup, you can have a virtual mill within a high-rise building in Atlanta, and you can monitor and run that plant remotely. You can use service companies to support the repair and maintenance on-site rather than having highly trained engineers on standby at each plant. You can have these virtual plants that you run remotely from a screen, without having to walk down the line.”

While IIoT is already being adopted by more traditional industrial markets, Harrison noted that it will be just a matter of time until more consumer-facing verticals use the connected technology in their operations. Already some food processing manufacturers are using IIoT to visualize and monitor how a product is being made, in order to reduce waste, increase throughput and expand their offerings.

“Markets want more flexibility around batches, so instead of having to produce large batches of thousands of a particular shampoo or cereal in one location, you could potentially have smaller batches that support the local market,” Harrison said. “This will allow manufacturing facilities to be more nimble, and production will be a lot more like a new car that goes down the line with your name on it and gets the custom options you ordered.”

The active and purposeful connection of multiple devices, along with the potential for scalability and automation, is what sets IIoT apart from the wider IoT space, Harrison said. But the increased connectivity and integration in facilities also creates the need for security and redundancy to be built into IIoT solutions. Since data is no longer stored within the four walls of a facility, and because so many critical operations rely on wireless communications, systems must be put in place to address potential failures. (A future blog post will discuss the steps that can be taken to ensure a secure and reliable IIoT-integrated facility.)

IIoT is creating substantial opportunities in traditional industrial markets, but the approach will soon be adopted by more unexpected verticals outside the industrial sector, Harrison predicted.

“It isn’t just about ‘industrial’ as we think of it—in factories or refineries. It’s potentially about all assets, cities, and consumer-facing verticals that will shift to more of an IIoT approach than just IoT, and it will be interesting to see how the two merge together,” he said.

By Molex
Next: Heat is the enemy of high-speed signals. What’s your data center’s plan to beat it? →