Turn off that cell phone 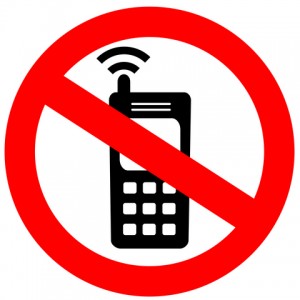 Suppose you are sitting in your usual first class seat on a Boeing 777 and you notice that the actor Alec Baldwin is sitting next to you and has not turned off his PED (Personal Electronic Device) (this happened in June 2011 you may recall).  Should you ask that he be removed from the plane? Yes, by all means, because it will make a better story than just sitting next to him. Is not turning off the cell phone a good reason to have him removed? Your call, but here is some data to consider.

Because we work for Molex people will naturally assume we have the last word on all things electronic, but the last word on this subject has yet to be written.  I was once on the design build team for the fly by wire cables on the Boeing 777. We shielded those cables from “DC to Daylight” as the saying goes. We worried over most of the 116 pages in the Mil STD 464 on electromagnet compatibility covering things like lightning strikes and flying over cell towers.  Lightning is a lot (1.21 gigawatts as we learned in the movie “Back to the Future”); cell phones are considerably smaller at < 1 watt. I would scoff mightily at the suggestion a cell phone signal could have any effect. The data, however, is not so clear.

No one has blamed any specific air crash on cell phones but this could be a wakeup call.

David Carson, a technical fellow at Boeing, says interference occurs when signals hit highly sensitive electronic sensors hidden in the passenger area, and that older planes are particularly vulnerable to the interference.

Incidents cited in the study include one where the navigational equipment of a Boeing 737 failed after takeoff, only to reactivate after a passenger was told to turn off a device.

Phone interference was also cited as a possible factor in a 2003 crash in New Zealand in which eight people died after the plane flew into the ground short of the runway.

The pilot had been calling home and that smacks of an ILS problem. My personal opinion is that he was telling his wife he was going to quit flying because he realized he was not any good at it and had a tendency to not pay attention during critical phases of flight.

But wait, didn’t you just read that Alaska Airlines and American Airlines are allowing iPad* mobile digital devices in the cockpits – right up close and personal with all that gear?  True, but these devices are tested and maintained by the airlines.  Who knows what is back in the cabin. Boeing tested 16 types of mobile phones and finally realized it was too much of a moving target. The phone you have today is not the same as last or next year’s phone.

And, the pilots can see if a device they know about and are controlling is causing a problem – the cause and effect is more direct.

Will this change some day? I predict yes, and pretty soon. Europe has made recent progress by working with some cell providers. Do you know something or have data that might make the FAA reconsider? Maybe, like Boeing, the FAA is taking the easiest path until the pressure from the flying public forces them to reconsider. Right now, however, the FAA regulation 91.21 makes the operators responsible for the use of portable electronic devices on their airplane so they won’t give you a break- not even if you are a movie star. The FAA motto is “we’re not happy until you’re not happy” so Kindle†, iPad and all other Personal Electronic Device lovers will have to continue to wait until 10,000 feet to enjoy their devices – until we push back with new data.

Next: Innovation to Evolve →