Frank Rehder, a Customer Service Systems Manager at  the Lisle, IL USA office, has the opportunity to be on the front cover of Runner’s World Magazine to share his story about how running changed his life. For the 3rd year in a row, Runner’s World is searching for two runners who are passionate athletes and they want to hear about his or her breakthrough running moments.  One of these moments happened for Frank with fellow employee and Molex Running Team member, Gene Callaghan. The two met at a CPR training  when they were paired together for a CPR demonstration.

Frank jokes that they had paired the littlest guy (Gene, who was already in good shape) with the biggest guy (Frank, who at the time weighed over 300 lbs.).  Jokes aside, the training demonstrated that Gene would have been unable to save Frank’s life because he couldn’t reach around Frank to perform the Heimlich Maneuver properly. 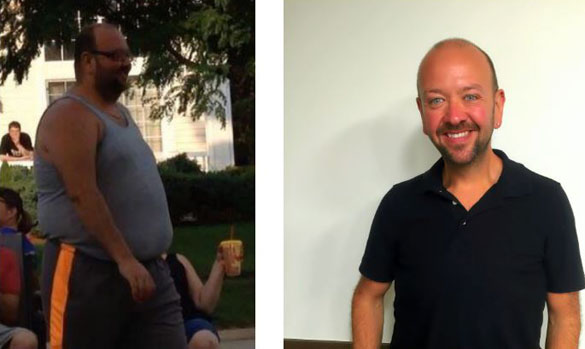 At the time Frank was getting ready to turn 37 and realized he was in the worst shape of his life. More seriously, he was beginning to have health problems. He felt like he needed to make changes not only for his sake, but for his wife and three kids as well. This was the beginning of the end to “old Frank” as he decided to become a healthier person for himself and his family.  One of the ways to get healthier was to begin running.  Frank trained for a 10k the following spring and his training went so well, he actually ran a half-marathon rather than the 10k he originally planned for. Now a member of the Molex running team, this fall Frank is running two full marathons including the Bank of America Chicago Marathon as a member of #TeamMolex with almost 200+ Koch/Molex employees from around the world.

Employees, fitness center members, friends and family alike have witnessed the transformation Frank has gone through in the last  2 years and are extremely proud of him.  Frank’s commitment to his own health has affected his family life and professional life in a positive way and at Molex, we strongly believe that with strong health, personal and professional successes are more likely and more enjoyable.

Making changes to one’s self can be challenging, but Frank has proven it can be done. While Gene could now save Frank’s life and perform the Heimlich if necessary, through hard work and a commitment to his health and wellness, Frank may have saved his own.

We should all applaud Frank as he has proven himself to be a role model and inspiration to those looking to get healthy or to maintain a healthy lifestyle. Please support Frank and vote for him on the Runner’s World website.

Next: Molex Fitness Center Member of the Month →