Why China Will Produce the Car of the Future, First

Future-gazing in the automotive industry may be the stuff of fantasy to many. But, upon review of the results from the recent Molex ‘The Future of Automotive’ survey, it was clear that it can be more truthful and tangible than many appreciate, even for pragmatic industry influencers. For example, in the fast-moving automotive industry, predicters and consumers alike have long projected a world of flying and driverless cars. While the former may realistically be some way away yet, there are nonetheless several technological stepping-stones that are already in play to get us to the Car of the Future. And, they point to China as the formative player that who will bring us there first.

While several years old now, the automotive acronym C.A.S.E., standing for Connectivity, Autonomous, Sharing/Subscription and Electrification, is now well-established in China and serves to outline why China is at the forefront in this area. Within this, power, connectivity, communication, safety, experience, and sharing are all key factors in how future vehicles will look and perform, whether these are packaged in a fully autonomous or semi-autonomous driving platform.

Looking at the automotive industry as a whole, China is uniquely positioned to develop many of the greener alternatives to the traditional combustion engine. In particular, decades of industrial advancement in China, including in the electronics field, are paying dividends. The electric battery supply chain in China is well established, with major players such as CATL and BYD well entrenched in this space. As such, the cost of vehicle battery technology is currently more competitive in China than in other countries such as Japan and Korea, facilitated to some extent by access to the relevant raw materials. These players are also able to produce high density batteries in the same size as competitive offerings but with more power, giving the obvious and important benefit of longer driving ranges. 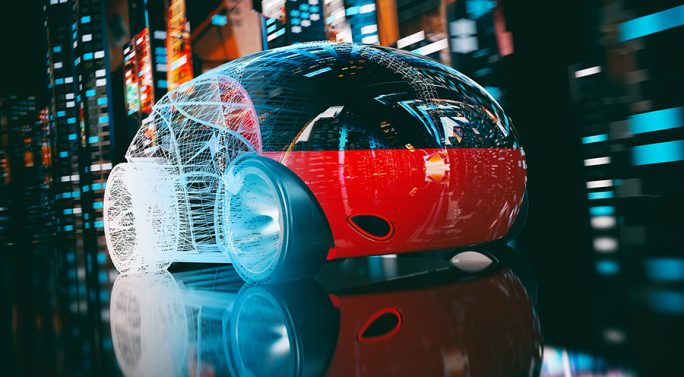 Further, with the China Government’s push for technology independence in several key areas, it has become easier for its Tier 1 and OEM players to develop advanced autonomous driving units, harnessing the connectivity and communications components, manufactured within China by companies like Molex, that will act as key drivers (pardon the pun) for the development of the vehicles of the future.

From a global perspective, China’s commitment to developing an internationally competitive EV ecology is entirely logical. After all, electric vehicles as the wave of the future is now well established, with 64% of respondents in the Molex and Dimensional Research Car of the Future survey indicating that the average new car purchased in 2030 would be fully electric, compared to 27% in the hybrid-electric camp. Furthermore, 71% thought that lithium-ion battery technology would remain viable for the next decade.

The sheer breadth of China’s advancements in technology in recent years ensures that the term ‘EV ecology’ is apt. Whether it’s through its own industrial initiatives, and/or through cooperation with partners, China’s development of key technologies such as 5G is playing a major role in making the C.A.S.E. model a reality. With 5G, vehicles can communicate both with the outside world (IoT) and with each other (IoV, or Internet of Vehicles), while also facilitating the incorporation of advanced apps and platforms that will make the future driving experience more convenient as well as more advanced. The ‘Sharing’ element plays into the realm of what the future driver may look like, and what this driver may require or demand of their driving experience, from entertainment, apps, to road safety information.

As things stand, China has several big names already jousting for a piece of the pie, and for this reason, it currently boasts the highest EV output in the world. Add to that dedicated China automotive giants such as Geely, Great Wall, SAIC, Guangzhou Automotive Group and Chang’an, even internet giants are getting involved in connected electric vehicles, with Baidu playing its part through the development of its own Apollo autonomous driving platform solution for up to level 3 and 4 driving autonomy. The latter, once fully tested and approved, would presumably provide China’s domestic automotive players with a convenient and faster path to market with their connected autonomous vehicles.

As 2021 gets underway, the national commitment to be at the forefront of the push to deliver the car of the future first is full speed ahead. The target for new energy vehicles that includes plug-in hybrids and hydrogen fuel-cell vehicles is now 20% of all China auto sales by 2025, up from around 5% in 2020*. This is matched by the aim to have vehicles with partial self-driving technology account for 50% of all new-auto sales by 2025, double its previous goal. Under the most recent plan, new vehicles with “level 2” or “level 3” automation are projected to comprise 70% of sales by 2030**.

Signs of entrepreneurial vision are everywhere. Global EMS giant Foxconn, well known for its association with household brands such as Apple, Sony and Dell, has formed a software and hardware open platform for EVs called MIH, in conjunction with partners such as Arm and Autoliv, with the ultimate intention to develop EVs for different automobile models, and to position MIH as the “Android system of the EV industry”, much in the same the way that Qualcomm may provide a reference design in the mobile phone industry. From a hardware perspective, Foxconn has expressed that its MIH platform focuses on four major features: ‘Industrialization’; Lightweight integrated molding’; ‘Powerful EEA architecture’; and ‘Self-driving platform’, with all results of the MIH platform being open to partners.

In addition, the recent announcement of the Baidu, Geely partnership that will create a new electric car company is further evidence of China’s determination. The new independent subsidiary of Baidu will oversee the entire industrial chain, from vehicle design, research and development to manufacturing, sales and service to produce vehicles with intelligent driving capabilities. While Geely will contribute its expertise in automobile design and manufacturing, Baidu will support the new company’s growth with its full portfolio of core technologies, including Apollo autonomous driving, DuerOS voice assistant for Apollo and Baidu Maps. The aim is to reshape intelligent vehicle offerings and bring about a revolution in intelligent transportation.

For our part, Molex will continue to work in close collaboration with our customers pushing the boundaries of what is possible in Automotive. For nearly 30 years, Molex has played a vital role in the automotive industry, addressing demand for flawless interconnectivity of mobile devices and data services, bringing its heritage in networking and longstanding reputation for product quality and customer collaboration to meet growing consumer needs across the automotive ecosystem. From connectors to antennas and ADAS to EV, coupled with our China facilities and unrivaled engineering expertise, Molex will ensure that our customers have access to the innovation that’s right for them.

Such collaborative initiatives will create opportunities for many company types, not just established and traditional OEM automotive players, but also start-ups, and will serve to accelerate the launch of new connected EVs. In turn, EVs will be more readily available to consumers in China, who will find it easier to acquire one of the limited number of vehicle licenses, and encounter fewer driving restrictions imposed by local authorities, in large part due to the move towards environmentally cleaner vehicles.

Understandable concerns about the future of autonomous EVs include reliability, safety, battery life and infrastructure. Many of these potential obstacles are already being addressed with advances in safety cameras and traffic management systems, and the integration of technologies such as AI, cameras, LiDAR (which serves to build a 3D model of a vehicle’s environment for collision assistance), and other sensing or visual technologies. The much-discussed topic of battery range is ever-present, with many research dollars, Renminbi, etc. already dedicated to advancing technologies in that area. Infrastructure development depends on each country’s vision of its own transportation future, but studies already project significant growth in this area, such as IDTechEx’s forecast*** that the global EV charging infrastructure market value will grow at 24% CAGR and reach US$40 billion by 2030.

So, while we may not be quite ready for the flying car of popular dreams, the advanced fully autonomous ‘driverless’ electric vehicle is certainly within reach for the automotive manufacturers of today and tomorrow, and I am confident that China has the determination, expertise and capacity to get there first.

By Molex
Next: 5G and AR/VR: Raising the Bar for Immersive Experiences →