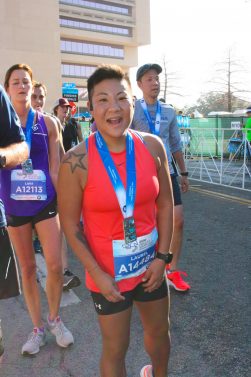 Last year, Laurel Anderson spent the weekend of October 13th supporting Team Molex by volunteering at the Abbott Health and Fitness Expo and spectating at the Bank of America Chicago Marathon. She bounced along the racecourse that wove through many of Chicago’s beautiful and diverse neighborhoods, cheering on her friends and colleagues as they accomplished the incredible feat of running 26.2 miles through the city.

But for Laurel, the world of running was barely a blip on her radar before the beginning of the year. In January 2019, a good friend asked her to join in a 10k race. Once it was evident that this was neither a joke nor a mistake, Laurel considered the invitation for a few days and ultimately took the plunge. Leveraging the assistance of a local friend and coach, Laurel trained from January to April, giving her sufficient time to find the right groove and prepare herself mentally and physically.

Pleasantly surprised by the experience, she signed up for another 10k shortly thereafter. As she increased her involvement, Laurel began meeting other Koch runners and their respective running communities. Before she knew it, she joined a local women’s running group and began training for a half marathon in November 2019. As she trained, she established a goal for herself: she was going to complete her first half marathon in under two hours.

Laurel dedicated several months to ensuring she was adequately prepared for the race and crushed her goal by finishing in roughly 1 hour, 54 minutes. This tremendous accomplishment further ignited her passion for running, leading her to sign up for another half marathon the very next month in Dallas, TX. The course in Dallas presented several new challenges: high heat and terrain that was significantly hillier than Wichita, KS. Laurel overcame this adversity and, with just four weeks of training under her belt, crossed the finish line in under two hours.

She went on to sign up for the 2020 Chisholm Trail Marathon and devoted several months to the arduous training journey. Unfortunately, Laurel was in taper when the race was canceled due to the COVID-19 pandemic. Despite the initial devastation, she plans to train for and run the 2021 Chisolm Trail Marathon in March of next year. 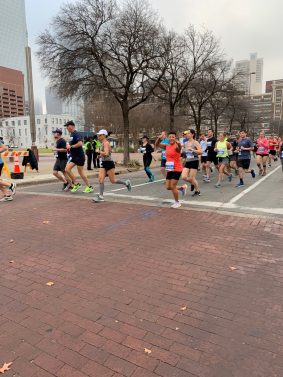 In the meantime, Laurel will stay active and committed to running through a variety of races this fall. The Bank of America Chicago Marathon, one of the world majors, was also canceled due to COVID-19 and has pivoted to a virtual event. Laurel will participate in the 1 mile, 5k and 8k virtual races throughout the week of October 5. Additionally, on October 11, Laurel will take on yet another new opportunity: guiding a woman who is visually impaired through a local 5k. Using an 18” tether and vocal signals, they will move in sync, and Laurel will ensure her safety along the racecourse.

Laurel’s accomplishments over the past year and a half are incredible, to say the least. Her advice to anyone looking to get started with running is to just go for it. Additionally, she encourages runners to avoid focusing on speed alone and to instead find their motivator. This may be speed, but it could also be the sense of accomplishment after crossing a finish line, the adrenaline of the racecourse or a personal competition to continuously improve. Runners of all levels should do what they need to push themselves while keeping their best interests top of mind.

We are proud of all that Laurel has accomplished and we look forward to cheering on her future endeavors as a valued member of Team Molex!

By Molex
Next: 5G Testing Technologies—Precision and Optimization Realized →