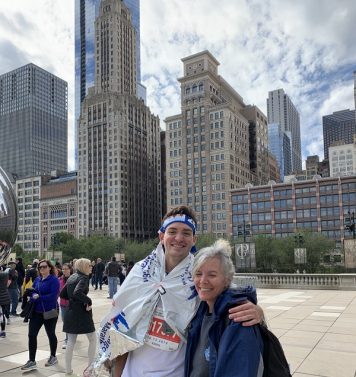 For Louis Card, this year’s Chicago Marathon looked incredibly different from last year’s experience. On a cool fall day in Atlanta, he conquered the 26.2-mile course. Set against the backdrop of the vast greenery of Atlanta’s many running trails and parks, this run was noticeably quieter than a typical marathon. Motivated by his future aspirations, Louis pushed through—one peaceful mile after the other.

This marks Louis’s third marathon in a journey that began only a few years ago. In addition to staying mentally and physically well, running has an even more special meaning to Louis. During his freshman year of college, he underwent a surgical procedure that increased his lung capacity by 25%. For Louis, this was the ultimate gift, and he saw running as a way to honor it and pay it forward. A few years later, while he was studying at North Carolina State, Louis was offered the opportunity to move to Atlanta to participate in a co-op with Georgia-Pacific, a Koch Company. While there, he was introduced to Atlanta’s several runner-friendly trails, such as the Beltline—22 miles of unused railroad tracks surrounding the city. Before long, running became solace to Louis—a way to decompress and disconnect from the chaos of everyday life. Even today, he recognizes the importance of maintaining balance in his life, and running helps him achieve that.

In 2018, he crossed his first marathon finish line on an undoubtedly unforgettable day. Motivated by the crowds and runners around him, he ran triumphantly through his hometown of Raleigh. To make the day even more special, his mom completed the half marathon and met him at the finish line, where they celebrated their accomplishments together. 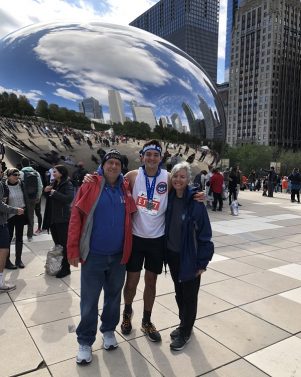 Louis continued running and trained throughout the following year for a marathon in Chicago, one of his favorite cities. The

Bank of America Chicago Marathon was an experience unlike any other—intricately woven throughout the city’s diverse neighborhoods and along streets lined with spectators, music and signs. He joined the nearly 300 runners from Team Molex alongside 40,000+ others on October 13, 2019 and achieved a personal record of 4 hours.

Despite COVID-19 requiring Louis to change his plans a bit, his marathoning expedition is far from over. Having signed up for two marathons in 2020—one in Portland and one in Savannah—he deferred both races to next year and plans to complete them in addition to the 2021 Bank of America Chicago Marathon. He participated in the virtual 2020 Bank of America Chicago Marathon to continue his training as he segues into an intense year of marathons. For Louis, the momentum keeps him going. Training for one marathon is immensely grueling, so he will continuously build off his progress to keep pushing forward. He keeps himself going with the mantra, “You can, and you will.”

Congratulations to Louis and all the runners completing any of the various distances for the 2020 Bank of America Chicago Marathon Virtual Experience. We applaud your dedication and commitment, especially in the face of adversity.