Several years ago, Molex joined a group of companies and government organizations to prove that Solid-State Lighting could be used to provide excellent quality lighting within our homes and offices while dramatically reducing the energy use in the building. The organization is called the ZEBRA (Zero Energy Building Research Alliance) and is a collaboration between the Department of Energy, Oak Ridge National Laboratories, and Schaad Companies.

The objective of the alliance was to evaluate a variety of building technologies, heating and cooling methods, lighting approaches, and appliances to determine which are the most cost effective and have the highest performance. Four homes were constructed in Oak Ridge, Tennessee just outside the “gates” of the Oak Ridge National Laboratory. There were two pairs of homes with homes one and two being identical in appearance, but with entirely different approaches for the construction of them. The same is true for homes three and four.  If you would like to learn more details about how the homes were constructed, please visit www.zebralliance.com.

At the time this project was being completed in the spring of 2010, the SSL light sources we had available to us were the Molex Transcend™ product line. The LED source for these lights was a single AC LED produced by Seoul Semiconductor. It provided roughly 150 lumens of warm (3000K) light and consumed 4 Watts of power. The efficacy of this light source was not nearly as high as the 60-70 lumens per Watt that we are currently providing but with proper lighting design, we have been able to achieve some amazing results.

Kevin Willmorth of Lumenique LLC did the lighting design for house number 4. He completed a lighting simulation for the home and determined where and how many light sources would be needed. Because each source only provided 150 lumens, more sources would be needed to be able to properly distribute the light throughout the rooms. Today, with our 1200 lumen light sources, we could easily reduce the number of sources required to light the same space.

After the homes were completed in the summer of 2010, the public was allowed to tour the homes and to provide comments and feedback on the “look and feel” of the demonstration projects. The feedback from the visitors was very positive on the look of home number 4. They liked the “dramatic” look of the lighting in that the lights were directly at the locations where light was needed.

As we all know, CFL lighting is very non-directional and when it is placed into a room, the fluorescent sources light the ceiling, walls, and fixtures, as much as they light the surfaces, which is where we would actually like to have light.  Please see the two attached pictures to see the difference in the look of home 3 and 4. 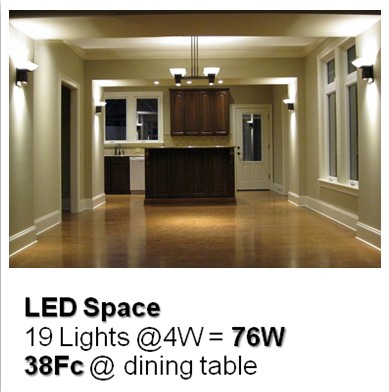 Some of the comments we received is that the LED space had more drama, more task light and less glare. But was also of interest to the researchers was that it used 60% less energy to do a better job of lighting the space.

One year later in September of 2011, we have one year of data. The homes have been monitored and data collected on their performance for one year. Dr. Bill Miller from Oak Ridge, who was responsible for the design and build of the homes, called us and said that the performance of the LED lit home was even better than they had expected. The data shows that the LED-lit home actually uses 80% less energy than the CFL-lit home. This result is dramatic if one considers the fact that the CFL is thought to be the most energy efficient light source currently available.

It is expected that as the cost of Solid-State Lighting comes down over the next several years to the point that this will be the only good option for high quality, dimmable, and low energy use lighting, that the United States could reduce its energy use by the equivalent of 150 large power plants.

Although it is taking longer than most of us have expected it to, Solid-State Lighting will be ready to replace both incandescent lights and CFLs in the next several years. With efficacies of 80 lumens per Watt, they are 6 times more efficient than our old “bulbs” and now they have been shown to be at least 3 times as efficient as CFLs.

Next: DeviceNet Diagnostics – indentify issues before they disrupt productivity →